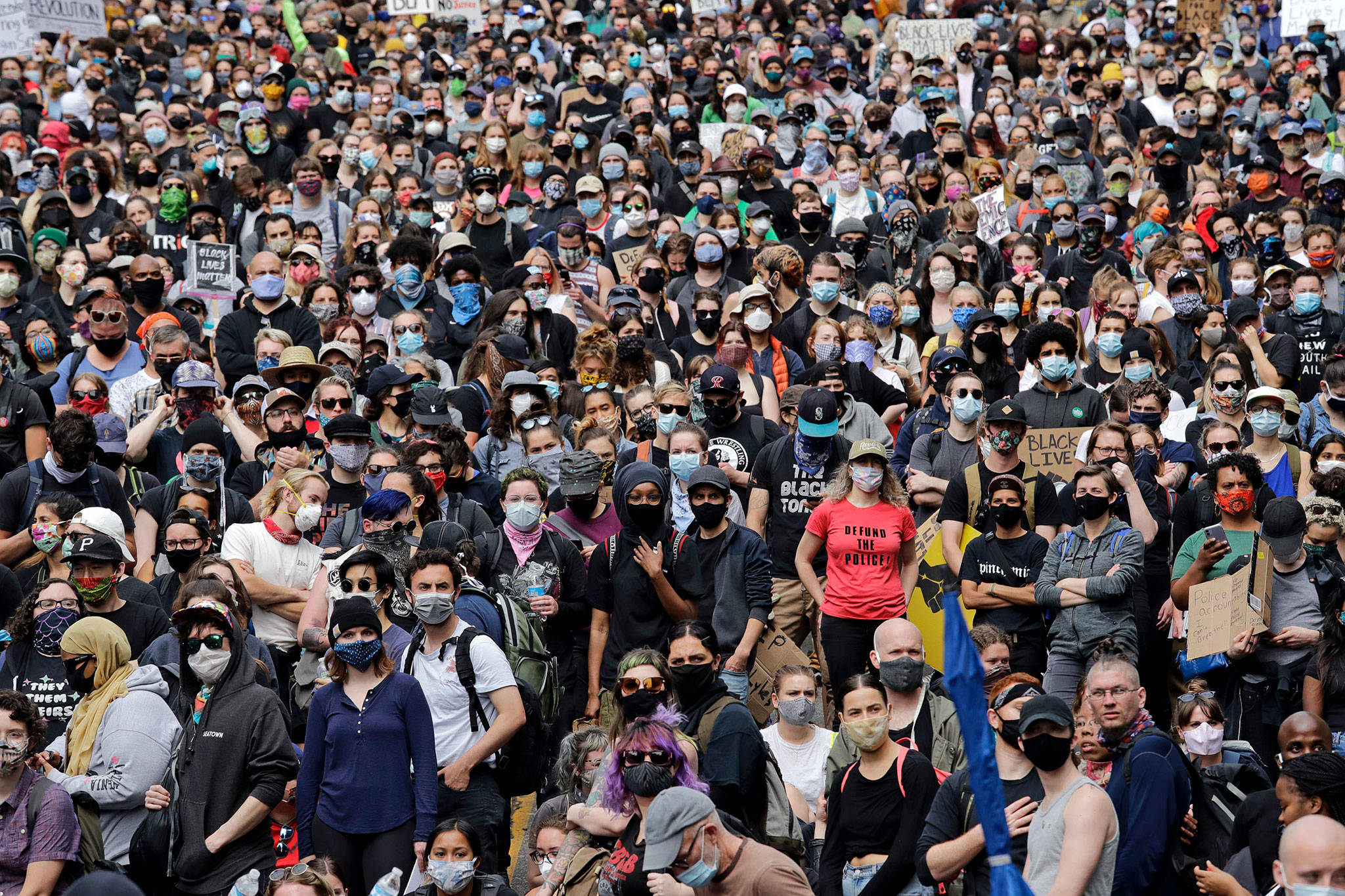 Peaceful protesters fill a street adjacent to Seattle City Hall on Wednesday, June 3, 2020, in Seattle, following protests over the death of George Floyd, a black man who was in police custody in Minneapolis. (Elaine Thompson/Associated Press)

By Gene Johnson | The Associated Press

SEATTLE — A sea of protesters packed streets in Seattle on Wednesday in a sixth straight day of demonstrations over the killing of George Floyd, amid increasing criticism of the police department’s repeated use of tear gas and flash-bangs to disperse mostly peaceful crowds.

By mid-afternoon thousands had descended upon City Hall, where police holding batons formed lines behind metal barricades. The demonstrators carried “Black Lives Matter” signs, called for cutting the department’s budget and shifting the money to social programs, chanted for officers to remove their riot gear, and knelt or sat together as they surrounded the building.

After a weekend of chaos that saw police vehicles burned and stores looted, officers on Monday and Tuesday nights unleashed pepper spray, tear gas, flash bangs and rubber bullets to disperse crowds, compounding concerns about police power and racial injustice highlighted by Floyd’s death in Minneapolis on May 25.

Floyd, a black man, died after a white Minneapolis police officer pressed his knee on his neck for nearly 9 minutes, not lifting it even after Floyd, who was pleading for air, stopped moving.

It was another in a litany of unarmed black men killed by police in the U.S.

Seattle leaders sought to address some of the concerns raised by the protesters, insisting that they agreed that hard work was needed to undo centuries of racial injustice in the U.S. Mayor Jenny Durkan met with some protest leaders, including former mayoral candidate Nikita Oliver, in City Hall before meeting with demonstrators outside for a second straight day.

“What we and you are protesting today is not just the death that we saw in Minneapolis,” Durkan told the crowd during a contentious appearance. “It is that that murder resonates over generations of black experience in America.”

But the crowd booed the mayor after she said some changes — including a planned requirement that officers not cover up their badge numbers — would not happen overnight.

Durkan and Police Chief Carmen Best, who is black, addressed the Community Police Commission on Wednesday. Best also addressed Seattle City Council members, acknowledging concerns while also insisting that officers had a right to defend themselves from assault, noting that a small number of protesters had thrown water bottles and rocks at officers.

City Attorney Pete Holmes announced that he would withdraw a recent motion filed in federal court that sought to lift much of the reform-oriented consent decree that the police department has operated under since a 2012 settlement with the Justice Department.

He noted that residents had filed some 12,000 complaints over the department’s handling of the protest, saying in a press release, “we are about to witness the most vigorous testing ever of our City’s accountability systems.”

Among the reports the city’s Office of Police Accountability are reviewing are those of a young girl being tear-gassed, officers placing their knees on the necks of two people who were being arrested, and protesters twice grabbing unattended rifles out of police cars before being disarmed by a television news crew’s security guard. Many of those were captured on video.

Barnhart sworn in as new judge