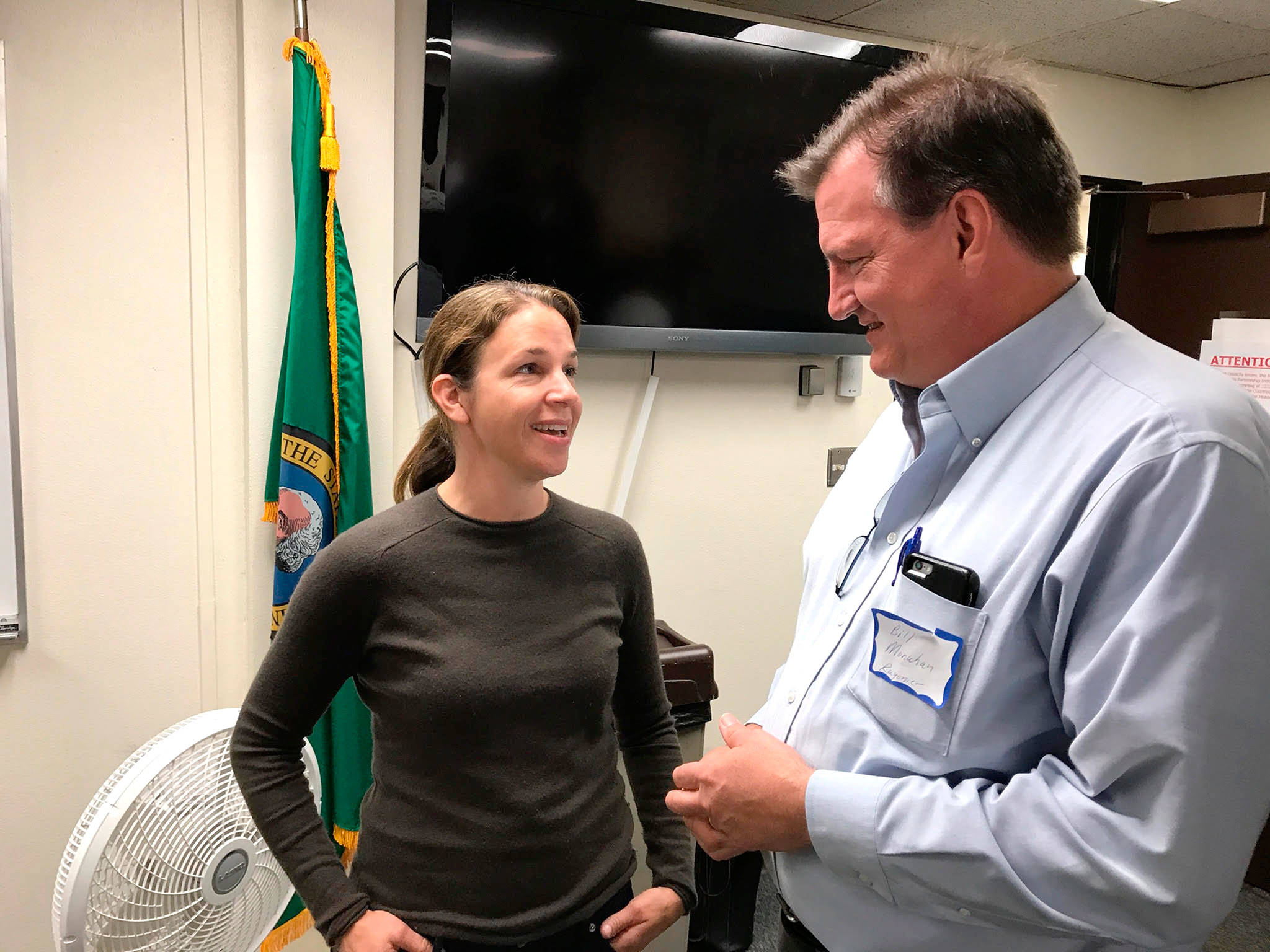 DNR manages 201,000 acres of forested and other trust land in Jefferson County and 162,000 acres in Clallam County. Most are forested trust land. The agency also manages 2.6 million acres of aquatic areas.

Franz, a former Bainbridge Island City Council member elected to the state post in November, answered questions for 75 minutes during a wide-ranging discussion.

It drew so many participants, including a vast array of elected officials, that the Clallam County commissioners who hosted the event had to move the crowd from the emergency operations center in the courthouse basement to the statelier empty chambers of the old courthouse courtroom.

Franz, herself a former lawyer, promised as she spoke to people packed into the courtroom’s spectator pews that DNR will write a strategic plan for recreation lands it manages.

She also promised to look into concerns such as those expressed by Forks City Attorney-Planner Rod Fleck, Port of Port Angeles Commissioner Steve Burke and Clallam County Commissioner Randy Johnson.

Fleck, Burke and Johnson complained of receiving scant information from DNR on timber volume and revenues from forest land managed by the agency, making it difficult for tax district public policymakers to set budgets and make planning decisions.

“We don’t know what we are getting from DNR, so we budget zero,” said Johnson, a former president and CEO of Green Crow timber company who also holds an ownership interest in the company.

“Our goal is trying to get information not only within our agency and tracking it but also getting it out,” she told Fleck.

“After we are able to look at this, we will reach out to you,” Franz told Johnson.

Johnson said Friday he was satisfied with Franz’s response.

“I think her response to most everything in general was very, very good,” he said.

“I think she cares about rural areas.”

But Kler did criticize the Navy for the impact of its activities on sea animals and from jet noise “that’s coming over some of our quiet lands,” asking that DNR be cognizant of that when working with the Navy on trust lands issues.

Decision must be made with future generations in mind, Kler said.

“That’s the balance we all have to look at,” Franz responded.

It will provide technical-staff assistance to natural resource-dependent communities — although not additional funds.

“We don’t have money for this program,” Franz said.

“It’s not like we have a big bucket and can say here and here and here,” she motioned as though tossing money.

She said rural communities like those in Clallam and Jefferson counties can apply for the assistance in which, as a DNR flyer passed out said, DNR “will partner with communities to pair our assets and expertise with sustainable development opportunities in counties across the state.”

A DNR questionnaire for potential initiative projects is at http://tinyurl.com/PDN-DnrInitiative.

“The goal is to have stakeholders that have already come together,” Franz told meeting participants who included 24th District state legislators Mike Chapman and Steve Tharinger as well as several environmental activists.

DNR hopes to announce awards of assistance to communities by December.

Scuba-diving enthusiast Bill Roberds was among several divers who urged DNR to develop its aquatic resources for recreational opportunities, which in Roberds’ case included establishing a dive park in Port Angeles.

“It’s been awful hard working with DNR to try to get this to fruition,” Roberds said.

Another speaker urged DNR to ease the “burdens and hurdles” that are tied to leasing aquatic lands for recreational opportunities.

Those roadblocks “are almost insurmountable,” the man said, pointing to the loss of an artificial reef for diving opportunities at Ediz Hook due to the construction of a Navy pier at Coast Guard Sector Field Office Port Angeles.

“I will make sure to connect with the aquatic program,” Franz pledged.

Other speakers included one man who urged DNR to focus on forest sequestration, or the storage of harmful carbon dioxide in trees to fight climate change, while another pushed for a carbon tax.

Franz said DNR policies need to be developed with an eye toward the environment as well as the economy.

“We are looking at carbon sequestration options,” Franz said.